This page lists and describes any farms that I have on my benchmarks page that contain a unique map combo for a farm. Use the sidebar or scroll down to navigate through each farm.
Amalgamated & Key Metas 

As the title says, this farm is about Amalgamated Gemstones and Keys in PoF, LS4, and LS5 maps. This farm is difficult to do without a somewhat organized group and above average DPS. There are lots of quick map swapping and traveling in order to get to other metas in time. Here's the rundown:

The hardest part about this farm is that each meta needs to be completed on-time or a minute after the next meta. For example, Junundu Wurms overlaps with Doomlore by a minute or two (depending on the DPS), but the escort and meta should still be up. Same with Oil Floes, but that also requires some organization to have everyone split into the three drills.
Core Tyria Train 

When the train enters Cursed Shore, it all depends on what is up and what is not. For the last few trials, we've gotten at least 1 meta up (temple, Arah, or Penitent). Since we're only there for 15 minutes, it fills the time slot perfectly. The goal is to tag as many mobs as possible and to get a few events in for the map bonus award. Generally, the map bonus is some T6 mat, but check what they are for each week.
Grothmar/Bjora Marches 

For every Grothmar meta, there is about a 40 minute timer. But, both Doomlore and Ooze Pit are able to begin before the 40 minutes. For example, Effigy could begin at :10 and Doomlore could begin at :35. For Doomlore, there will be an NPC ready at [&BAUMAAA=]. For Ooze, check the [&BPgLAAA=] waypoint to see if it is up.

For Bjora, I do a clockwise rotation from Jora's Keep Waypoint [&BCcMAAA=] throughout the eastern section of the map. There are a total of 6 champions and 3 raiding parties with generally low cooldown. Though, every event has a fail timer the moment they spawn so it's a gamble what events will be up by the time you arrive. Use the timer page to determine the respawn rate. 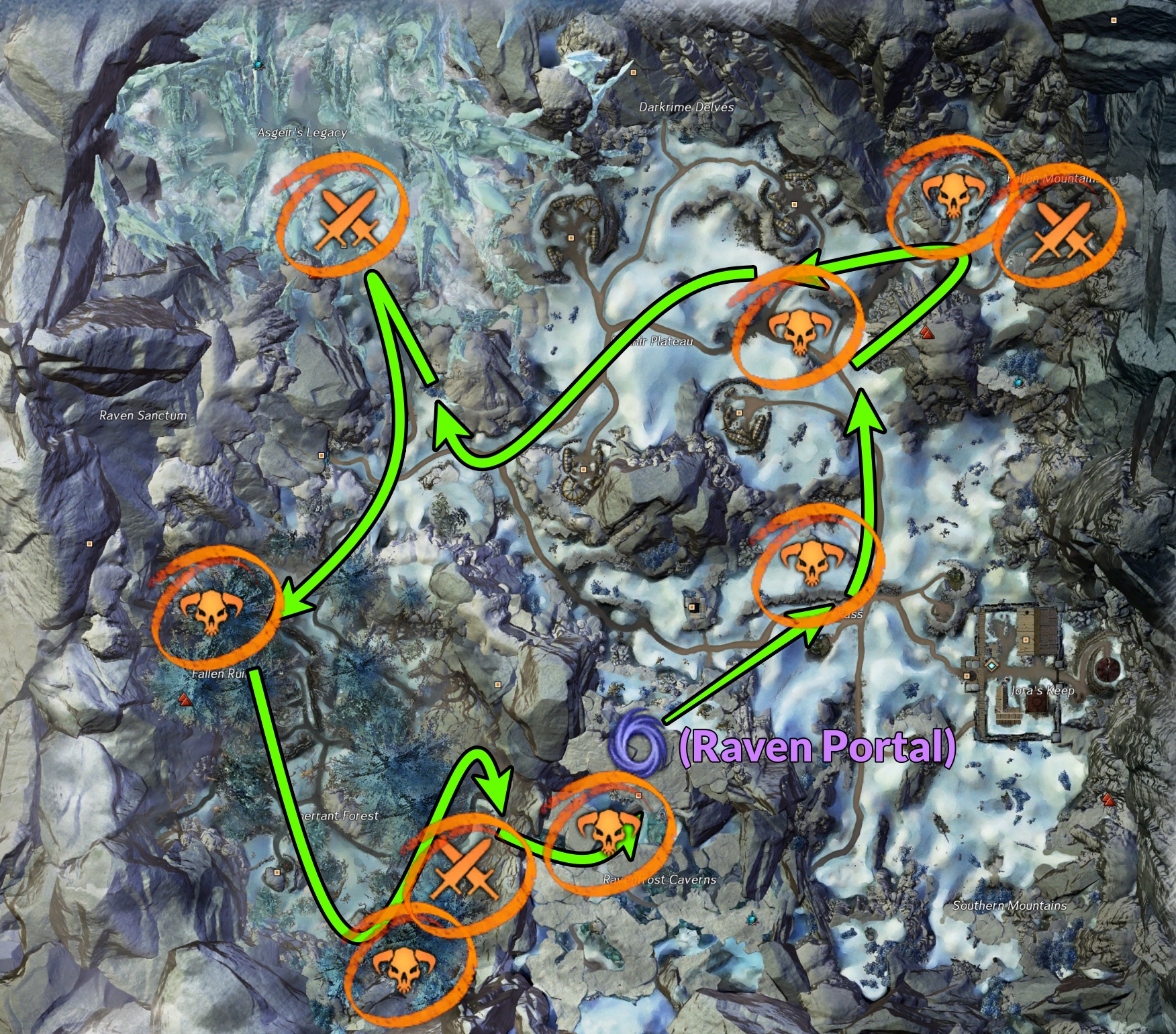 For every Grothmar meta, there is about a 40 minute timer. But, both Doomlore and Ooze Pit are able to begin before the 40 minutes. For example, Effigy could begin at :10 and Doomlore could begin at :35. For Doomlore, there will be an NPC ready at [&BAUMAAA=]. For Ooze, check the [&BPgLAAA=] waypoint to see if it is up.

Thus, other events take priority over the meta in order to max out loots and Volatile Magic. They all have a relatively low cooldown. For more information of the events, check out the map info page and follow the event respawn rates at the timer page . 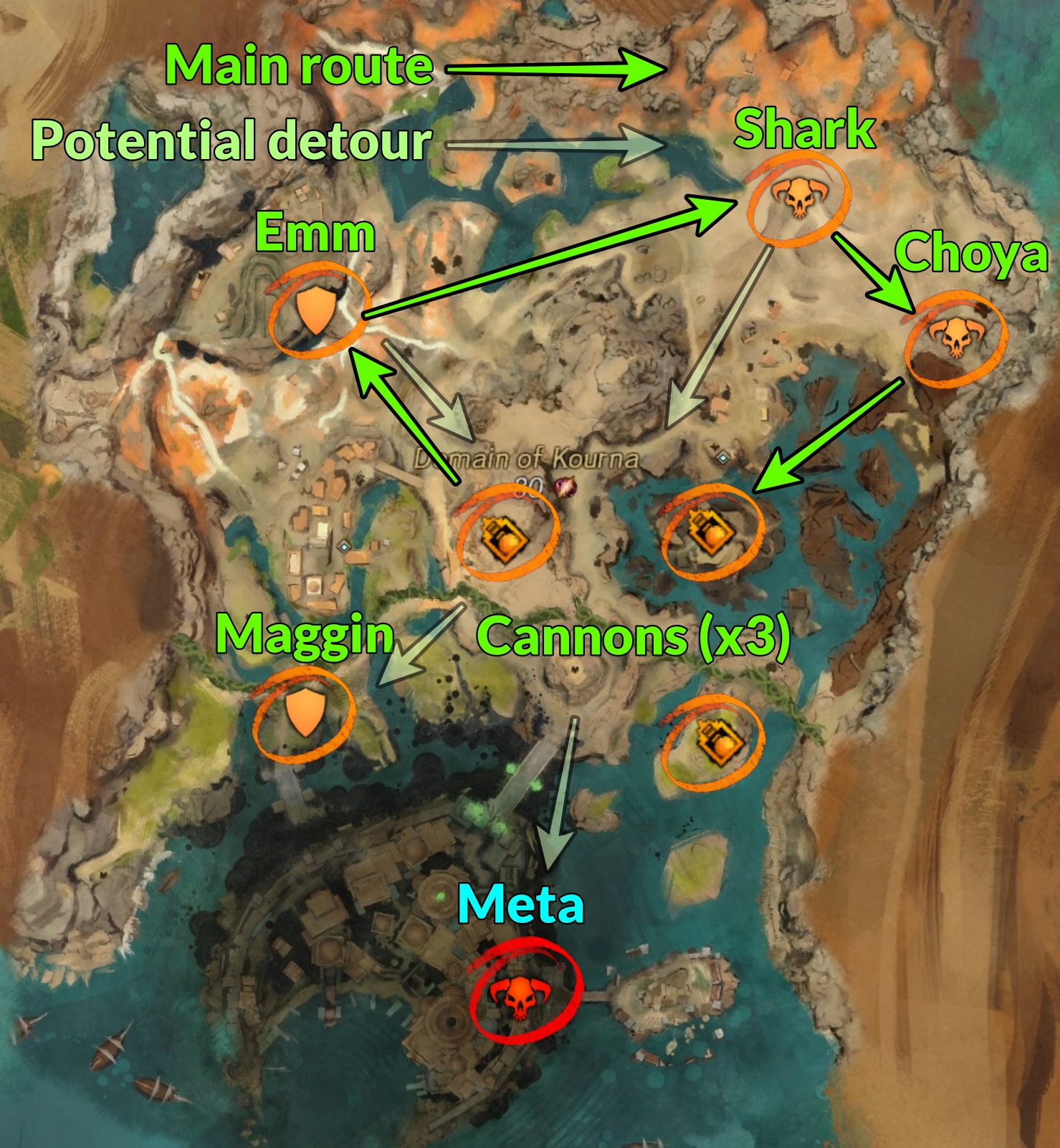 While this says "HoT", I do not go to Dragon's Stand. The reason is because Dragon's Stand is long and not an easy way to get loot. This farm goes as following:

This train is done by the guild Shiny Mayhem [SM] with cjosh.4598 and Noir.1652. The train starts and begins at XX:05, at reset. The route goes as following:

This farm is specifically aimed to hit as many events/metas as possible, in a given amount of time vs. doing every single event for achievements (Aurora). The limit I put myself is 2 hours because anything longer, the event train drags and some events are very slow.

This is the ideal rotation. Each time we do this train, it changes by either extending a map or the opposite.

Bitterfrost
We start here because if there's ever extra time to go back, the Icebound Chests would be back to gather again. Since we're only here for about 15 minutes, there's a good chance the group may not hit the meta. If it does, then great. The main point of this map is to gather the Icebound Chests and complete a few events along the way. Events could be defending a Brazier, lighting up a Brazier, or doing either the Griffon defense or Svanir chain. 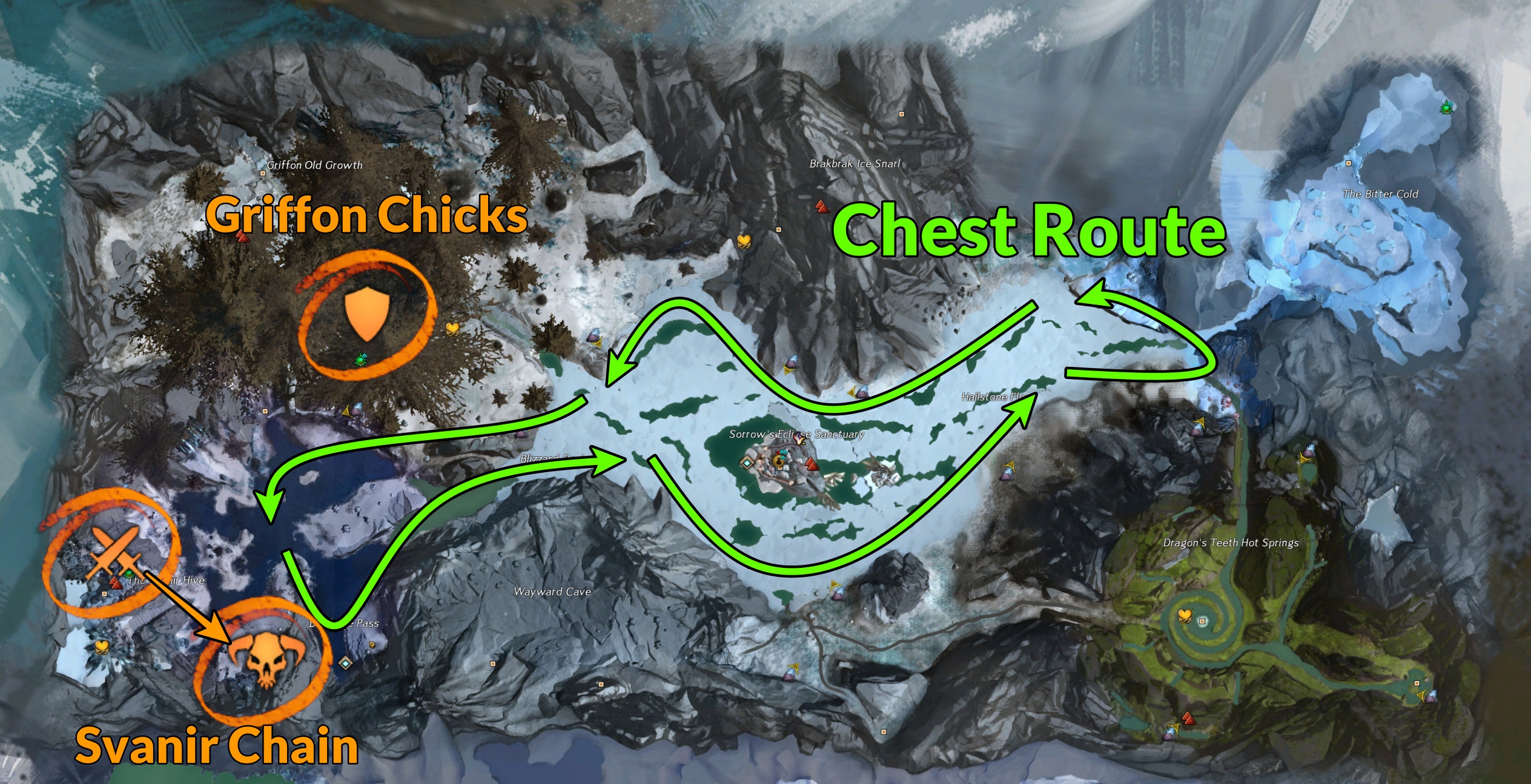 Bloodstone Fen
At xx:45, Tyria turns night. This means that the Spirits meta will be up on the ground level. This meta has a pre-event where you have to kill spirits all over the ground level, but it can be heavily upscaled with a squad. In the meantime, there are 3 repeatable events that spawn one after the other (White Mantle Seekers). Do this in a clockwise rotation to get extra loot and champions. Along the way could be a Treasure Mushroom as well. If either the Maw meta or Hablion is up, do that instead.

Lake Doric
This part of the train depends how long Bloodstone Fen's events went. If the Maw meta never occured, then the squad should arrive here on time around 1:05. If so, then there's time to do one round of the leather farm. If the train is later than 1:15, it's best to do Lake Doric events instead. The best to past the time are Jade Cannons or Skrimishes. 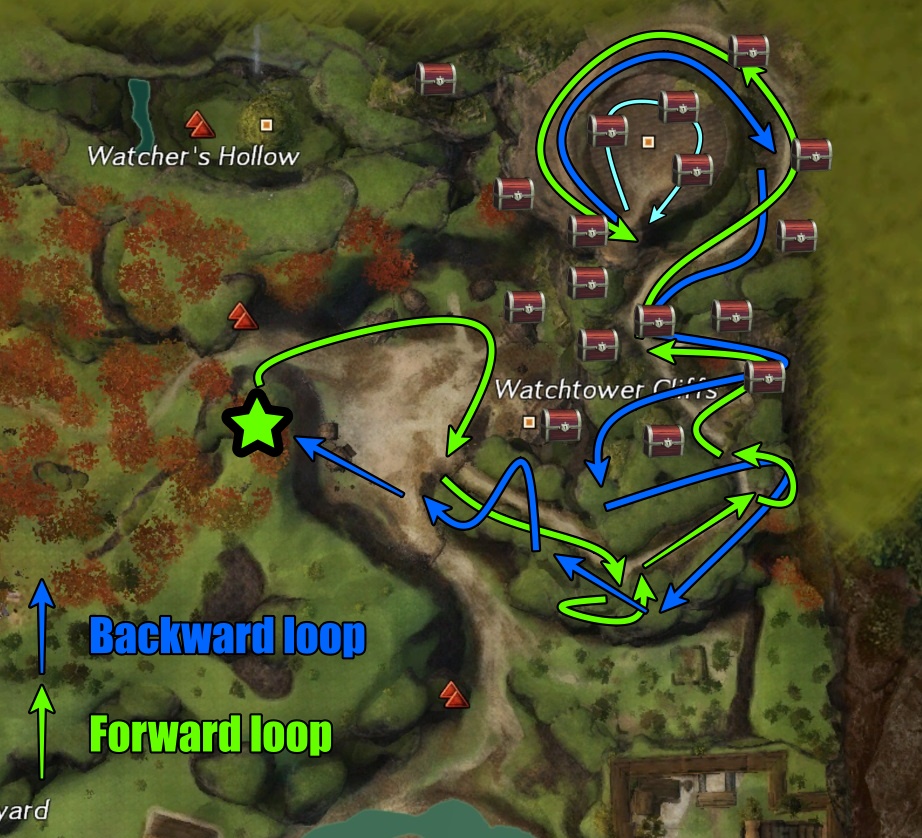 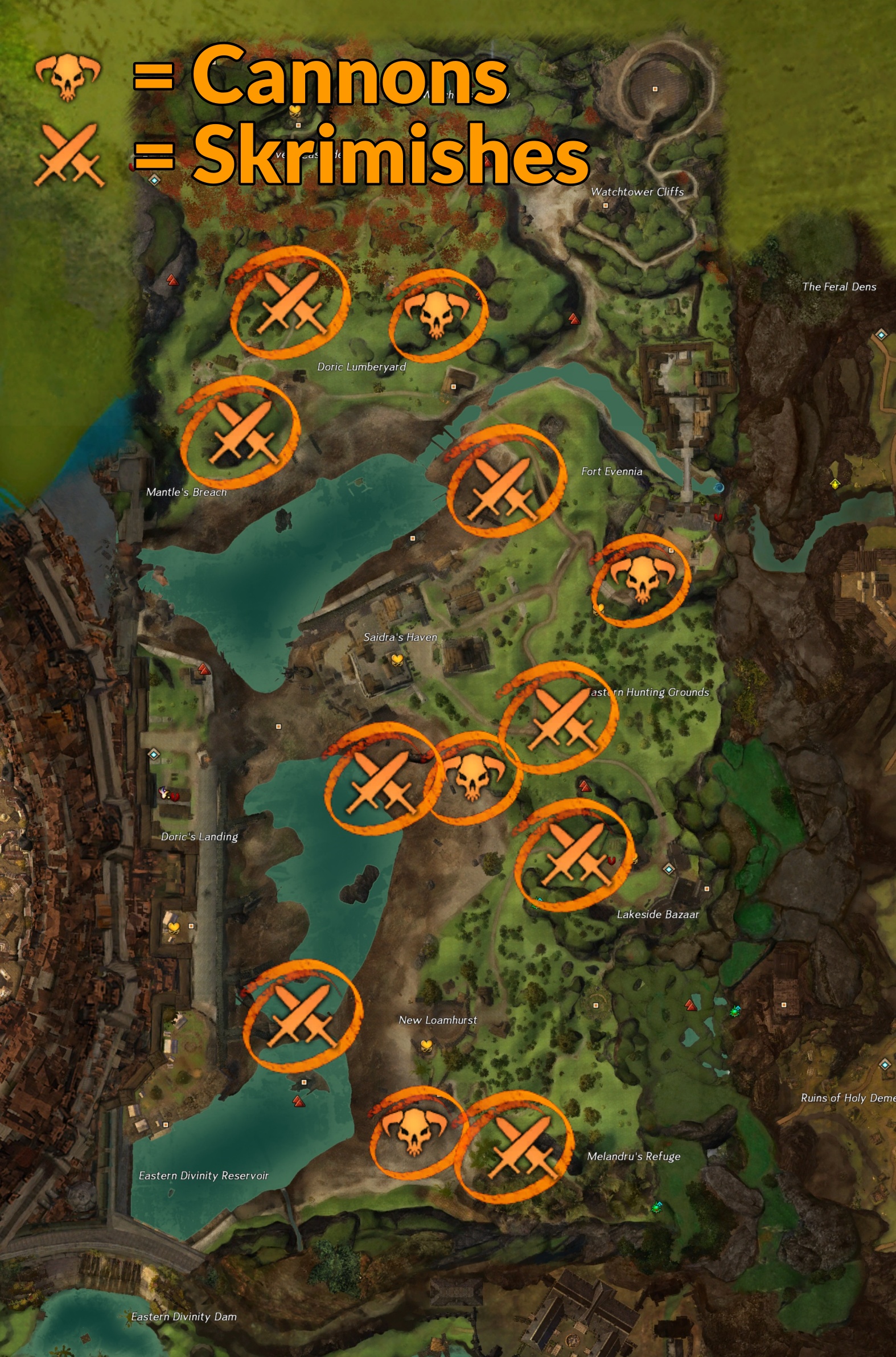 Draconis Mons
When entering the map, the main goal is to check the status of the meta. If the meta is not displaying on the side, then the squad should stay in the map and do other events until it spawns. If the meta is already progressed, then do the meta right away (whatever progress it is). Ideally, you want to do the pre-event where you kill wave of Destroyers over and over again to spawn champs. If you get to a map that already has their meta progressed and you finished it, go to the next map. If the meta was near completion before you got there, plan to head back ~16 minutes to get the pre-meta events.
Pre-Meta Phase (Destroyer Waves) 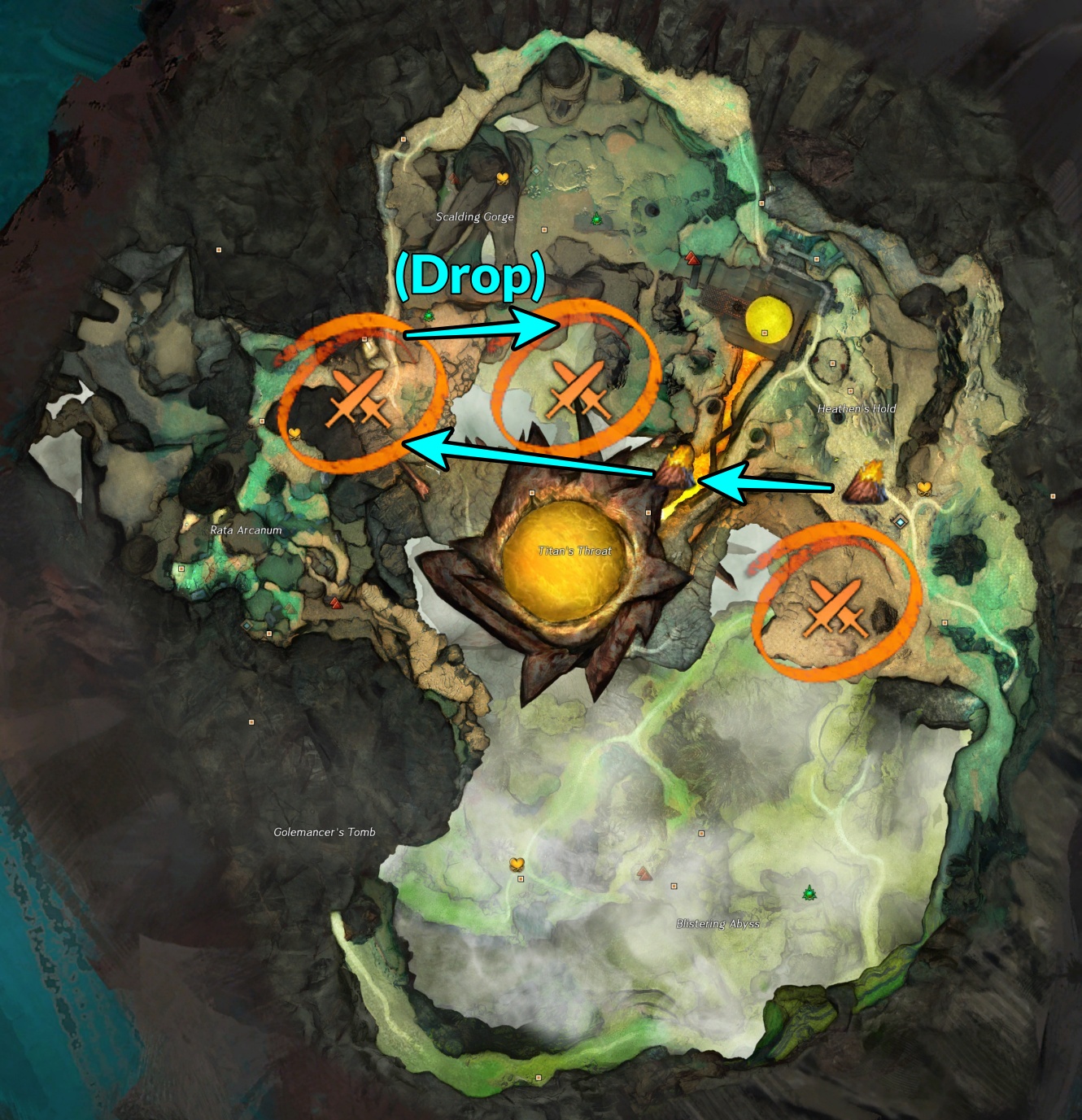 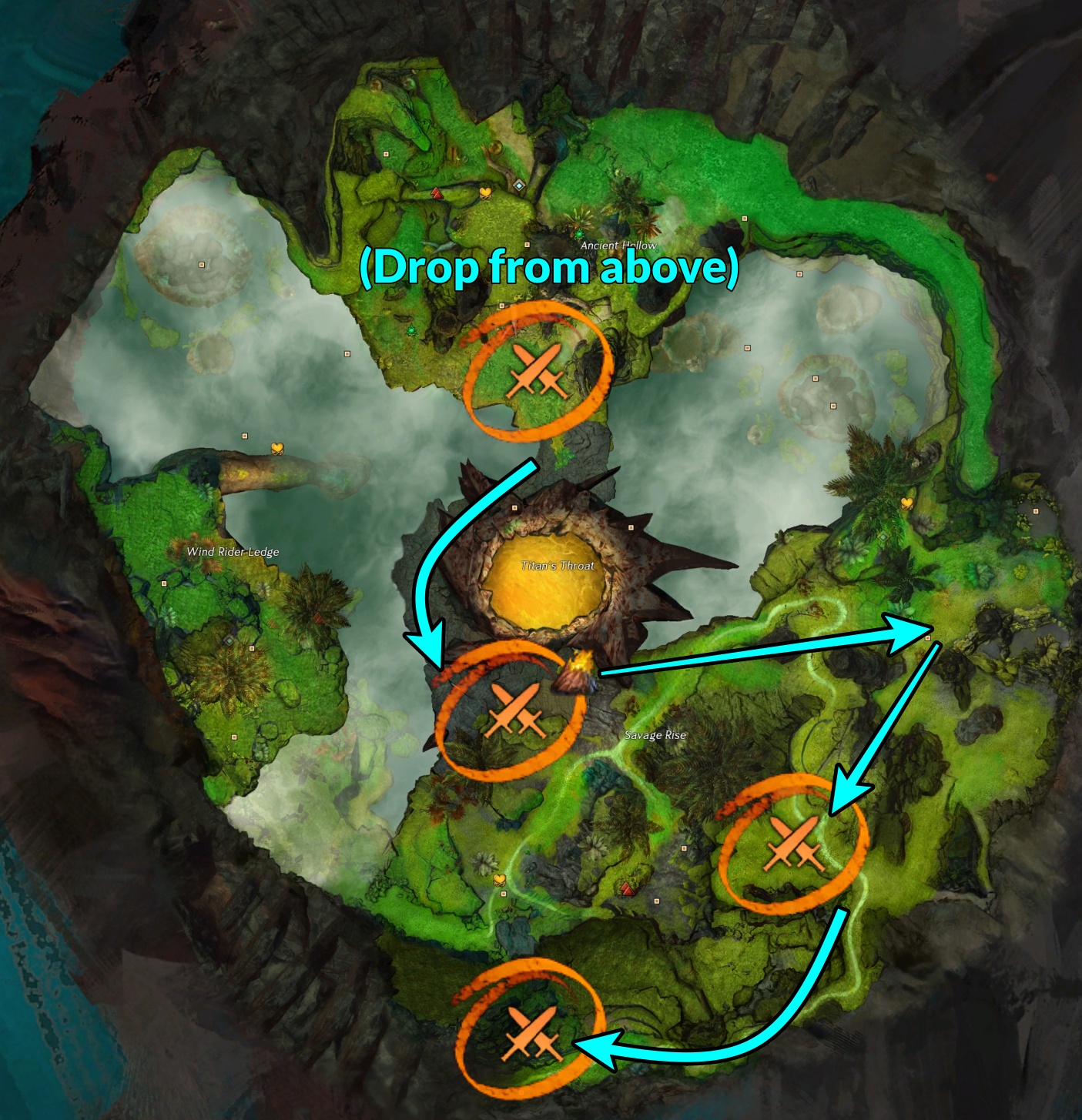 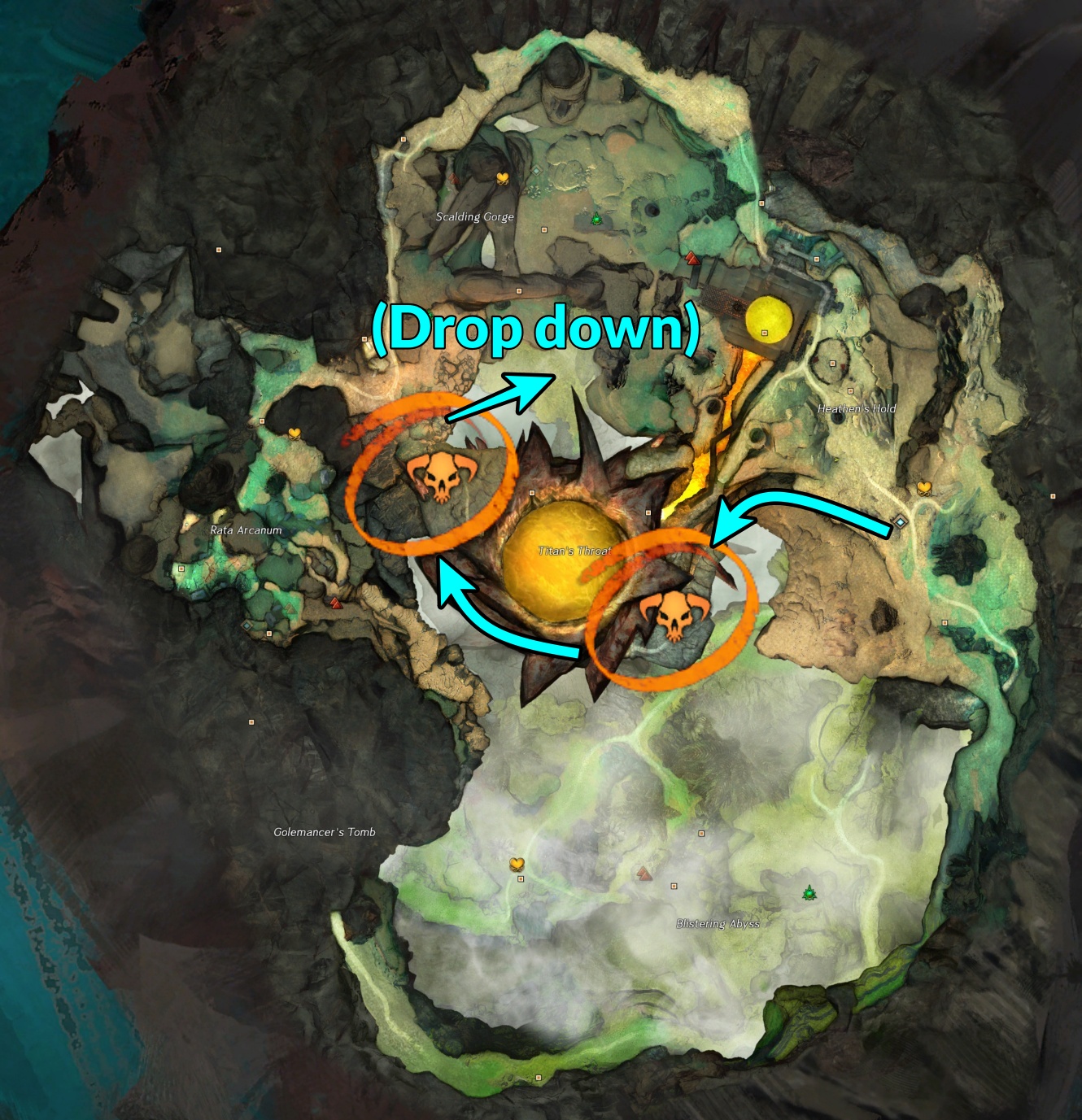 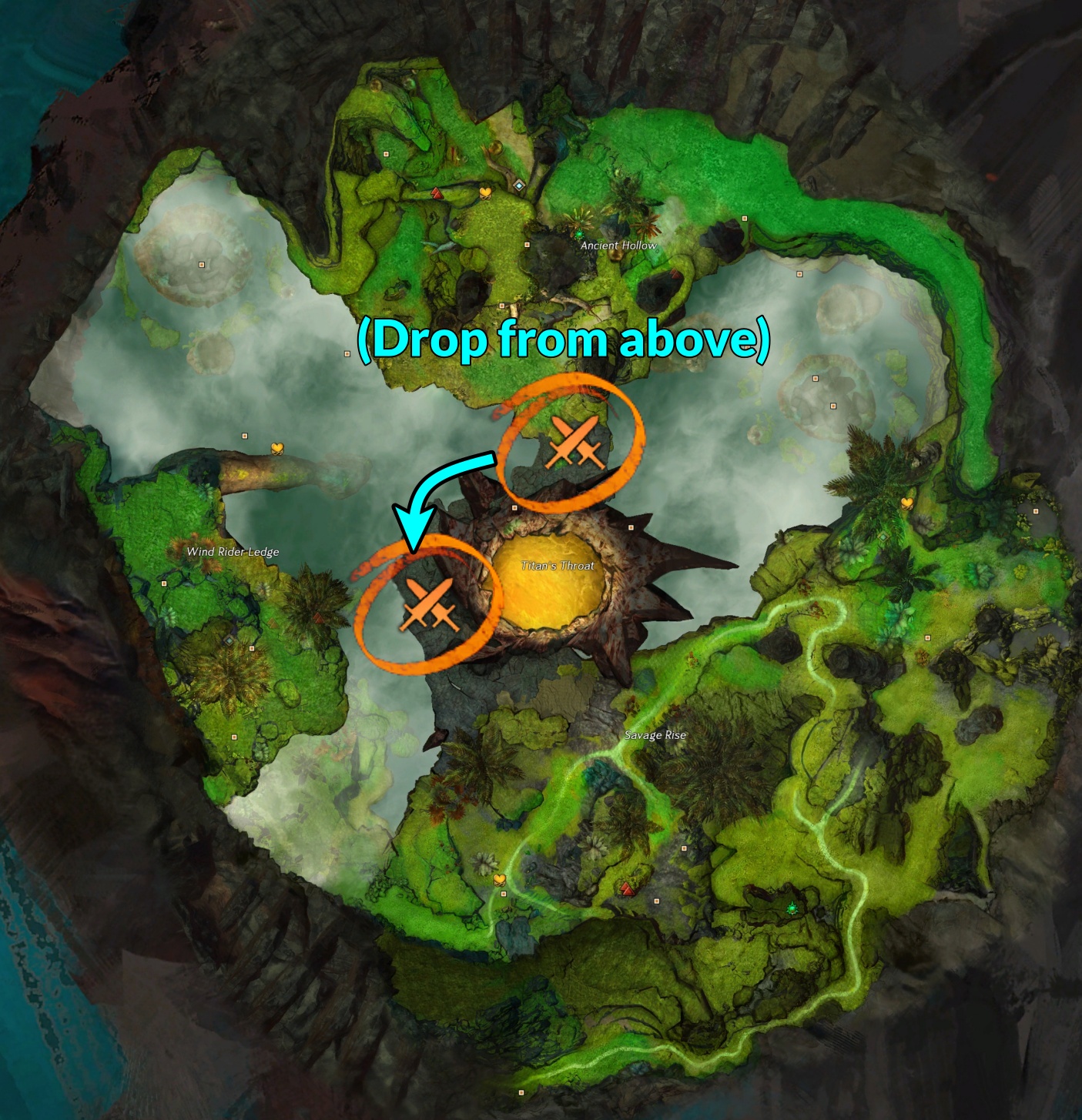 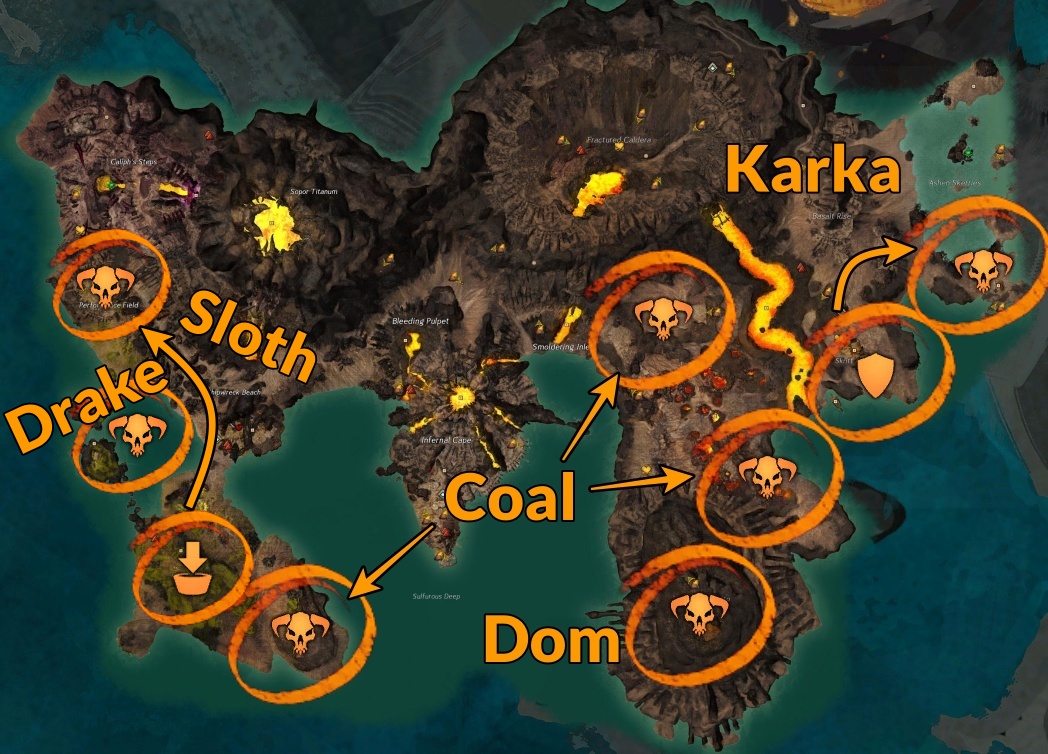 Siren's Landing
The most important part of Siren's Landing is hoping to get the meta relatively quickly. The meta itself has an exactly 30 minute cooldown. If you know when the last run was, you can track it. But, in most cases, you'll end up in this map waiting for it. It is important to have the squad members have the Shrines unlocked as well. Some may not be aware of this so...getting everyone on the same page will be difficult because you don't know who does or doesn't have it. In addition to events, it's great to do a quick chest farm. This is great to do coincide with the Winfred escort. 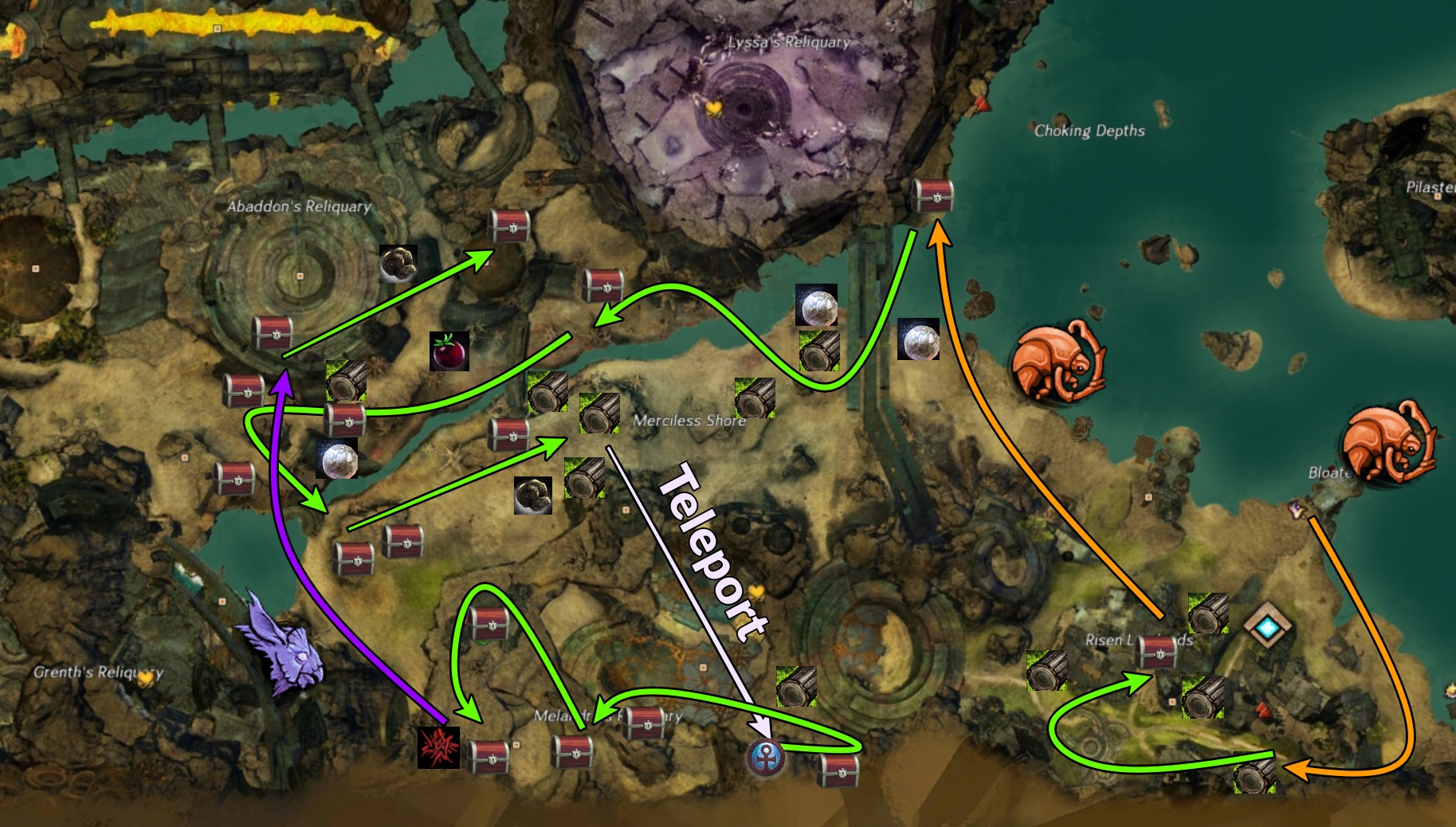 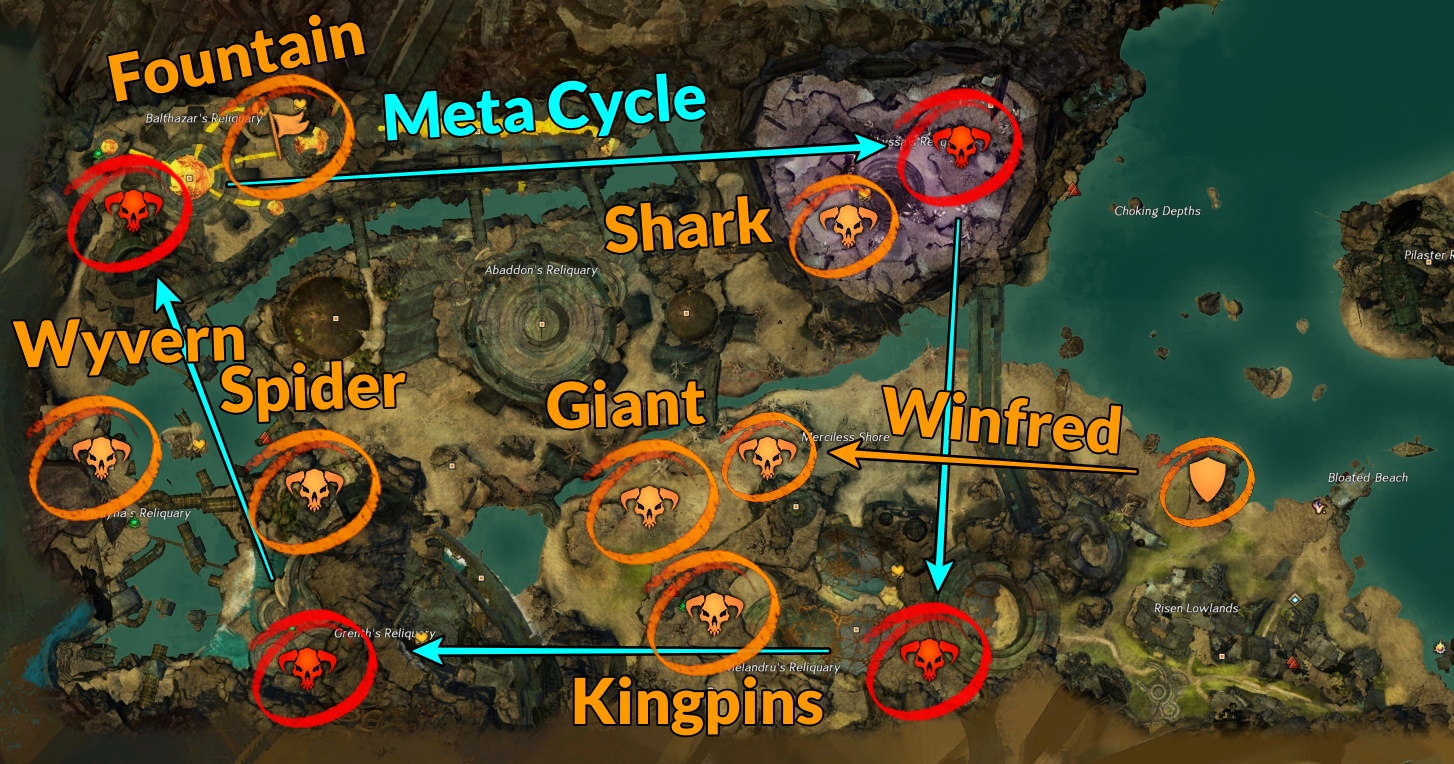 This farm is generally hosted by Guild MM Trading Company [TP], Overflow Trading Company [OTC], This Guild Ruined My [Life], and End Game [CREW]. The train is run extremely frequently during almost the entire day from afternoon to very late night. I highly recommend joining the Overflow discord for pings and notices on when they are going to run their train!


Each guild has their own preference to what the route is, but here's the general idea/plan:

Sandswept Isles
Ideal plan: South meta → North meta
Unlike the other LS4 maps, these metas are timed based on their instanced rather than a global timer. Depending on the progress of the map will deteremine the next steps for the train. In general, North meta is difficult to solo/small groups so it's rarely done and is able to pause its progress. The South meta is on a 40 minute cooldown from its last run, but a 15 minute timer will appear on the side if you're in the area.

If there is some time between North and South, doing the Dominus Crystallium, Mark III Golem, or Beetle Queen are good fillers. If not, there are also easy champion bounties, with north ones being easier.
PoF Meta Train 

This farm goes through all PoF maps except Desert Highlands. Besides me, the other commander that runs this train is darkphoenix.3740. The route as following:

This farm is about bouncing meta to meta after reset. Due to Daylight Savings, this may be placed on a different hour than reset. I heard there's a commander that does this and I'll have to record their train one of these days to replace this one. My route goes as following:

Each Thunderhead meta starts at the xx:45 of the hour, alternativing north or south for every hour. Depending on when you do the train, you could start at north meta or south meta. Each meta will take about 15-20 minutes to complete, leaving about 45 minutes to do Kourna events.

This farm starts with Sandswept and ends with Kourna. The reason is because the metas (2) in Sandswept are extremely profitable and has the potential to do both back-to-back. Kourna is involved because, to fill an hour worth of time, Kourna is a great filler to quick events that does not involve anything strict. Ideally, the farm would go something like this:

As the commander, it is possible to prep the train. By going to the map about 30 minutes to an hour early, parking a character to check on the activity of both metas is good to keep track of each. Use Sandswept timer page to figure out the respawn time of each meta if you happen to see it complete or fail.